Nippon Chemi-Con pursues its best corporate governance and continues to tackle for the enrichment, in order to materialize the corporate philosophy.
Nippon Chemi-Con also works for enrichment of the corporate governance from viewpoints of sustainable growth and enhancement of medium- and long-term corporate values. To this objective, the company is ensuring fair and transparent decision-makings and bolstering dynamic management through swift and decisive decision-makings based on an effective use of the corporate resources.

(a)Overview of our corporate governance system and reasons for introducing the system
Nippon Chemi-Con is a company with a Audit & Supervisory Board. The company introduced an executive officer system in June 2014 in order to have a distinct separation between inspection and supervision of management and execution of operations. The company concurrently reduced the number of directors but appointed one outside director to strengthen the function of inspecting and supervising management. In June 2015, the number of outside directors was increased to two to reinforce the function.
Our Audit & Supervisory Board comprises four members. The board audits decisions made by directors and operational executions carried out by executive officers, the business and financial positions of Nippon Chemi-Con and its subsidiaries in Japan and overseas. In addition to the statutory function of the Audit & Supervisory Board members, the company has established the Internal Audit Department (seven members) that is specialized in internal audit. The Internal Audit Department carries out field audit of not only legal compliance but also the appropriateness of operational efficiencies and procedures.
The new audit system of the company has allowed the Board of Directors to reinforce the function of inspecting and supervising management, in addition to the existing Audit & Supervisory Board and the internal audit section. The company believes that these audit systems will lead to establishing a corporate governance system that enables to perform proper inspection and supervision and increase the effectiveness.
(b)Details of the corporate organs 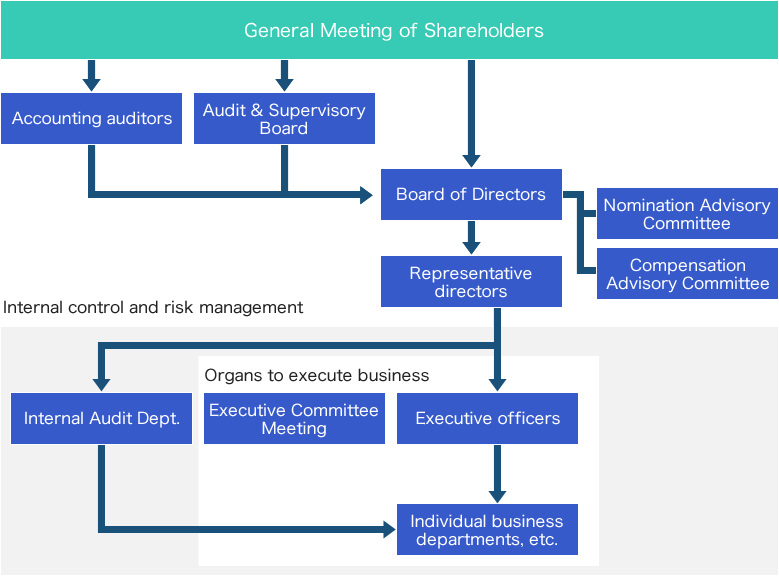 Nippon Chemi-Con's Board of Directors comprises six members (Chairman:Norio Kamiyama (Representative Director), Yoshifumi Minegishi, Osamu Ishii, Takumi Iwata, Kinya Kawakami, Suzuko Miyata). The Board of Directors with this small number has enabled to make swift decisions and appointed two independent outside directors (Kinya Kawakami, Suzuko Miyata) who are disinterested in the company to reinforce the function of inspecting and supervising management. Our Articles of Incorporation has limited the number of directors up to ten.
Furthermore, under the presence of the four members of the Audit & Supervisory Board, the Board of Directors has steered meetings by proactively seeking opinions the Audit & Supervisory Board members concerning resolutions on legal matters and those stipulated in the Articles of Incorporation, and other important management subjects including situations of executing operations, in order to make reports and resolutions while ensuring objectiveness in discussion.

Audit & Supervisory Board and Its Members

The Audit & Supervisory Board regulary exchanges opinions with Representative Directors, and also makes separate opportunities to hear from executive officers and important employees and, in closer collaboration with accounting auditors, receive reports on the results of audit and steering situations in order to reinforce the audit function for the members of the Audit & Supervisory Board.

Furthermore, the Audit & Supervisory Board is collaborating with accounting auditors by exchanging opinions every quarter with them on their audit reports and states of audit plans and executions, etc. and by holding an extraordinary meeting, if necessary, during the term.

Nippon Chemi-Con has set up the Compensation Advisory Committee (two members out of three are outside director) , an advisory organ to the Board of Directors. The committee aims to reinforce the independence and objectivity of the function concerning decision-makings on compensation of directors and executive officers. The Compensation Advisory Committee consult with other members about matters concerning compensation of directors and executive officers and expenses opinions and advice to the Board of Directors. Such consultations are conducted after the committee considers the business scale and levels of compensation of employees of the company, and decent third party's study conducted periodically on compensation of corporate management, etc. in addition to levels of compensation of other competitors, socio-economic conditions, etc.

Note: others include CPA candidates, those who passed the Certified Public Accountant Examination, and those in charge of system auditing

Nippon Chemi-Con recognizes that it is essential to enforce thoroughgoing compliance and control risks to continuously enhance corporate value. Pursuant to basic policies for implementation of internal control systems, Nippon Chemi-Con proceeds with the measures to enhance risk management systems and compliance systems, as well as other various measures from the standpoints described below.

The "Internal Audit Department" which is controlled directly by the president is implementing internal control systems over financial reporting as stated in the Financial Instruments and Exchange Law.

Nippon Chemi-Con stands on the basis that corporate social responsibility is not only to pursue appropriate profits but also to contribute broadly to society through fair, transparent and free business transactions. Based on this recognition, the company ensures that every corporate activity is based on compliance with the law by repeatedly conveying the spirit of "Nippon Chemi-Con Group Charter of Corporate Behavior" to the company's officers and all employees by the president.
The company is also proceeding with the implementation of compliance systems for thorough adherence to "Nippon Chemi-Con Group Business Conduct Guidelines", which provides routine mind-sets the company should keep in mind.
In concrete terms, the company appoints the chief compliance officer who controls the compliance systems, and the Compliance Committee chaired by the chief compliance officer is promoting concrete measures for the penetration and firm establishment of compliance awareness. In addition, the company has implemented compliance education of employees by rank to improve their awareness of compliance.
In an effort to eliminate antisocial forces, the company has specified in "Nippon Chemi-Con Group Business Conduct Guidelines" that the company do not support any activities by any nations' antisocial forces or groups and take a resolute stance on these activities, and keep all employees informed of it.
As well as trying to collect information from outside specialized agencies including the police on a regular basis, the company has built a system to take prompt action in cooperation with outside specialized agencies if such cases occur.

3.Contract for Limitation of Liability with Outside Director or Outside Member of the Audit & Supervisory Board

Nippon Chemi-Con has concluded a contract, which limits compensation for damage that is provided for in Article 423 (1) of the Companies Act, with each of the outside officers pursuant to Article 427 (1) of the Companies Act so that the outside directors and outside members of the Audit & Supervisory Board can perform their expected roles adequately. The amount of limit of liability for damage compensation under such contract is limited to a sum stipulated in law.

4.Overview of the Liability Insurance Contract for Officers, etc.

5.Requirements for Special Resolution of General Meeting of Shareholders

Nippon Chemi-Con's Articles of Incorporation stipulate that a special resolution of General Meeting of Shareholders, as specified in Article 309, Paragraph 2 of the Corporate Law, shall be passed in a meeting attended by shareholders with more than one-third of the voting rights of shareholders able to exercise voting rights, and shall be passed by two-thirds of the voting rights represented. The objective of moderating the stipulation of resolution by a quorum is to allow for flexible operation of General Meeting of Shareholders.

6.Items for Resolution by General Meeting of Shareholders that May Be Resolved by the Board of Directors

7.The Appointment of Directors