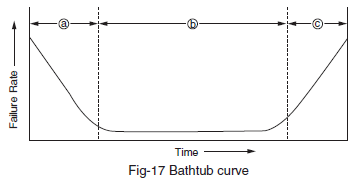 ⓐ Early failure period
At the comparatively early periods of use, devices/components fail by deficiencies in design or manufacturing process or incompatibility with operation conditions. For aluminum electrolytic capacitors, these defectives are removed by debugging at one of manufacturing processes before shipments

ⓑ Random failure period
Failure is stable low in occurrence and appears unrelated to their served term. Aluminum electrolytic capacitors are low in catastrophic failures in this period compared with semi-conductors and solid tantalum capacitors

<Catastrophic failure>
This is a failure mode that completely destroys the function of the capacitor such as short circuit and open circuit failure.

<Wear-out failure>
This is a failure mode where the electrical parameters of the capacitor gradually deteriorate and fail. The criteria for determining if this failure has occurred depend on the purpose of a device. For each series of capacitors, the following electrical parameters have been defined as criteria in the specifications of Endurance in the catalogs or product specifications:
・ Change in capacitance
・ Tanδ
・ Leakage current

Failure rates are often measured in units of % per 1000 hours (10-5/hour). For higher reliability devices designed with a smaller failure rate, units of Failure In Time (FIT) (10-9/hour) is used.

Aluminum electrolytic capacitors are considered as components of wear-out failure mode, the electrical characteristics of which gradually deteriorate and their failure rate increases with time. In general, the failure rate in FIT is determined by total componenthours (product of the number of tested components and test hours).

Due to the definition of FIT, the same FIT rate can be calculated in both cases of testing on the large number of tested components and also testing for long test periods of time. However, these cases mean differently for aluminum electrolytic capacitors. Using the failure rate is not suited to express the reliability of aluminum electrolytic capacitors, but the electrical characteristics based lifetime in hour should be considered to express the reliability.

Also, there are MTBF (Mean Time Between Failures) and MTTF (Mean Time To Failure) to express reliability. The latter is applicable for aluminum electrolytic capacitors because they are categorized into a group of non-repairable systems, equipment and devices for which MTTF is applicable.