Other component materials include a paper separator that holds electrolyte in place and another aluminum foil that functions as a draw-out electrode coming into contact with the true cathode (electrolyte). In general, an aluminum electrolytic capacitor is asymmetrical in structure and polarized. The other capacitor type known as a bi-polar (non-polar) comprises the anodic aluminum foils for both electrodes. 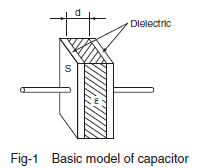 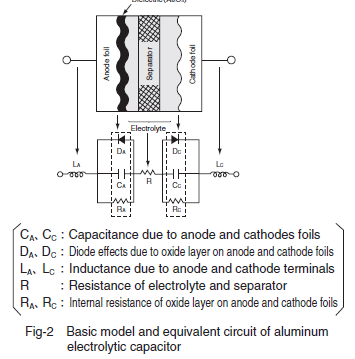 The aluminum electrolytic capacitor has, as shown in Fig. 3, a roll of anode foil, paper separator, cathode foil and electrode terminals (internal and external terminals) with the electrolyte impregnated, which is sealed in an aluminum can case with a sealing material. The terminal draw-out structure, sealing material and structure differ depending on the type of the capacitor. Figure 4 shows typical examples.

<Anode aluminum foil>
First, the foil material is electromechanically etched in a chloride solution to extend the surface area of the foil. Secondly, for the foil to form an aluminum oxide layer (Al2O3) as a dielectric, more than the rated voltage is applied to the foil in a solution such as ammonium borate. This dielectric layer is as dense and thin as 1.1 - 1.5 nm/volt and showing a high insulation resistance (108 - 109 Ω/m). The thickness of the oxide layer determines the withstand voltage according to their direct proportional relationship. For the etching pits to be shaped to the intended thickness of the oxide layer, the pit patterns have been designed to have efficient surface area extension depending on the intended withstand voltage (see Fig. 6)
<Cathode aluminum foil>
An etching process is performed to the cathode aluminum foil as well as the anode foil. However, the formation process for oxide layer is generally not performed. Therefore, the surface of the cathode foil only has an oxide layer (Al2O3) that has spontaneously formed, which gives a withstand voltage of about 0.5 volt

<Electrolyte>
The electrolyte, an ion-conductive liquid functions as a true cathode coming into contact with the dielectric layer on the surface of the anode foil. The cathode foil serves as a collector electrode to connect the true cathode with the external circuit. Electrolyte is an essential material that controls the performance of the capacitor (temperature characteristics, frequency characteristics, service life, etc.).
<Paper separator >
The separator maintains uniform distribution of the electrolyte and keeps the anode-to-cathode foil distance unchanged.
<Can case and sealing materials>
An aluminum can case and seal materials mainly consisting of rubber are used for the purpose of keeping airtightness.